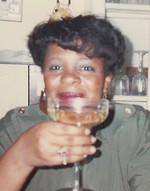 Cynthia Marie Minott was born to the union of Arthetta Minott and Samuel Minott in Kingston, Jamaica on November 16th 1954

Cynthia received her formal education at Toledo Public Schools. She graduated from Scott High School. She was a true BullDog.

Cynthia accepted Jesus as her savior at an early age. She attended Warren AME Church in Toledo, OH.

Cynthia loved driving semi trucks with her late husband Theodis. She also worked with various Agencies while fostering her displaced nieces and nephews. Cynthia retired early to be a stay at home mother to her children as well as taking on the role of a Foster Parent and wife to her husband.