To share your memory on the wall of Edith Brown, sign in using one of the following options:

Provide comfort for the family of Edith Brown with a meaningful gesture of sympathy.

She attended elementary school in Pine Bluff, KY. The family later moved to Almo, Kentucky and she graduated from Douglas High School in nearby Murray, KY. She also attended Kentucky State University before moving to Toledo, Ohio. She majored in Home Economics and was an excellent seamstress. Years later, one of her proudest accomplishments was making her daughter’s ball gown for Toledo’s NBPW Cotillion.

After moving to Toledo in 1950, Edith united with Mt. Zion Baptist Church under the leadership of Reverend Elijah Benton, where she served on the usher board. In the early 50’s, Edith worked for W. T. Grant Company Department Store, where she became one of the first African-American sales clerks in downtown Toledo. After nearly 20 years with W. T. Grant, Edith became an independent sales representative for Avon Products, Incorporated. For several decades, she participated as a vendor in the Old West End Festival. Over the next 50 years, she built a business that helped support her family and earned numerous awards, including vacation trips. She achieved the Avon President’s Club, Honor Society and Rose Circle levels. She earned numerous Mrs. Albee Awards.

In 1961, she married Clinton H. Brown, together, they created a home full of warmth and peace. Edith was a loving and caring wife and Mother. She demonstrated her love by doing for others. She was an excellent cook and her children, grandchildren, and great-grandchildren take pride in trying to cook like “Nanny’”. Having grown up on a farm she knew the value of planting and preserving vegetables. What started out as a small garden behind the garage grew to be a large backyard garden that she and Clinton worked together. Long before there were computers everywhere, she foresaw the importance of learning to type (keyboarding). She encouraged all youngsters to learn this skill. This paid off well for those who listened. She was a vital part of her grandchildren’s lives, especially Darren, Derek, Charlie and LaTisha. Her house was the before and after school place throughout their elementary school years. When LaTisha, her first and only granddaughter, was born she was so happy she danced.

Edith was selfless when it came to family and extended family. In addition to raising her family, and standing by her parents as they made their final transitions; Edith took on the task of taking care of two elderly aunts. She steadfastly cared for her husband, as a neurological disease diminished his health and took his life. She was a listening ear, a beautiful smile, a word of encouragement, a voice of reason and caution, and always a light to those around her.

We encourage you to share your most beloved memories of Edith here, so that the family and other loved ones can always see it. You can upload cherished photographs, or share your favorite stories, and can even comment on those shared by others.

Flowers were purchased for the family of Edith Brown. Send Flowers

Darryl, Ashley, Hailey, James, Wendy, and Sandy purchased the Dreams from the Heart Bouquet for the family of Edith Brown. Send Flowers 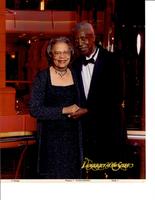