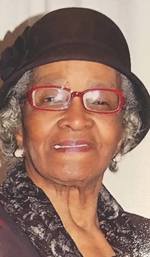 She confessed hope in Christ at an early age, and joined Macedonia Baptist church where she remained a faithful member until her health failed. She served in several ministries of the church, pastors aid, mothers ministry,and ushers ministry.

Edna worked for the Goodyear company for many years, before retiring. Some of her pastimes were cooking and baking, but her passion was serving the Lord. She truly loved her pastor/adopted son Clifford L. Mayes.

She was united to the late Charles Fletcher. To this union six children were born. Three which preceded her in death. YuKita
Washington, Donzie, and DeWayne Fletcher. Edna was also preceded in death by 3 sisters, Mayme,Winnie,Reva, and 6 brothers, James, Willis, Marcus, William, Charles,and Darden.