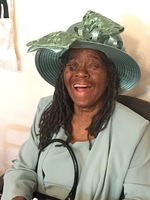 Emma Mae (Burnsides) Bailey was born on September 7, 1927 from the union of Lula (Page) Tinsley and John Burnsides and she departed this life on November 28, 2019 surrounded by her loving daughter and grandchildren. She was preceded in death by her sons Lilbert Lee and Lewis Shelton (Dewey) Bailey, her mother Lula (Page) Tinsley, her father John Burnsides and grandson Marcus Richardson, sisters Clara, Willa and brother John Tinsley.

She confessed to Christ at an early age and continued her relationship with God up until her passing. She was an active member of the Kingdom of Life Christian Center and Guiding Light Tabernacle where she served on the Mothers Board, Choir, Usher Board and Secretary of the Food Pantry.