To share your memory on the wall of Estelle Ellison, sign in using one of the following options:

Print
Estelle Ellison was born January 12, 1941in Simpson County-Magee, Mississippi to the late Ethel and Viola Jaynes. She departed this life on September 22, 2019.

She was born and raised in Magee, Mississippi and later moved to Toledo in th... Read More
Estelle Ellison was born January 12, 1941in Simpson County-Magee, Mississippi to the late Ethel and Viola Jaynes. She departed this life on September 22, 2019.

She was born and raised in Magee, Mississippi and later moved to Toledo in the early 1960s. There she met and married Henry in 1963 and to this union she had 2 children.

Estelle confessed and believed in Jesus Christ as her Lord and Savior at an early age. She became a member of Calvary Baptist Church where she served faithfully until her death. She was a member for over 50 years and she song in the choir.

Estelle was employed at the Ford Maumee Stamping Plant and was there for 30 years, retiring in 2004. She was quality inspector. She enjoyed going to the casino, spending time with her family, especially her grandchildren. She loved watching game shows, soap operas and going out to eat especially at her favorite restaurant, Cracker Barrel. She was a big fan of the Dallas Cowboys, The Ohio State Football and the Los Angele, Lakers.

To send flowers to the family or plant a tree in memory of Estelle Ellison, please visit our Heartfelt Sympathies Store.

Receive notifications about information and event scheduling for Estelle

We encourage you to share your most beloved memories of Estelle here, so that the family and other loved ones can always see it. You can upload cherished photographs, or share your favorite stories, and can even comment on those shared by others. 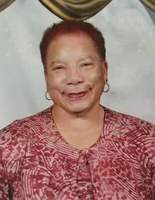