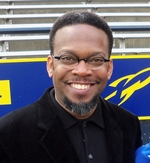 Randolph Franklin Nelson was born in Cleveland, Ohio, on September 29, 1963, to the union of the late Betty T. Pickens and Robert F. Nelson. He departed this life on November 21, 2019, in Toledo, Ohio, at the age of 56. Randolph married Angela Spence on August 6, 1988. To that union was born Israelle Nelson and twins, Matthew Nelson and Micaiah Nelson. Randolph accepted Jesus as his Lord and Savior while a pre-teen. As a young adult and adult, he was a faithful member of St. James Church of God in Christ and the Gift of Life Ministries Church and was a current member at the Maumee Campus of Cornerstone Church.

Randolph's early education was in Cleveland and Warrensville Heights, Ohio. He attended Bowling Green State University and graduated with a bachelor's degree in sociology from Loras College. Randolph previously worked at facilities specializing in the care of developmentally disabled men and was employed with the Toledo Municipal Court. He started his business The Winning Edge in the early 2000s and was a gifted cook known for his creative culinary skills.